Join Wishlist Thank you for letting me know that you like this event! Enter your email address below and I'll send you a reminder when we do the event again! Cheers, Filip 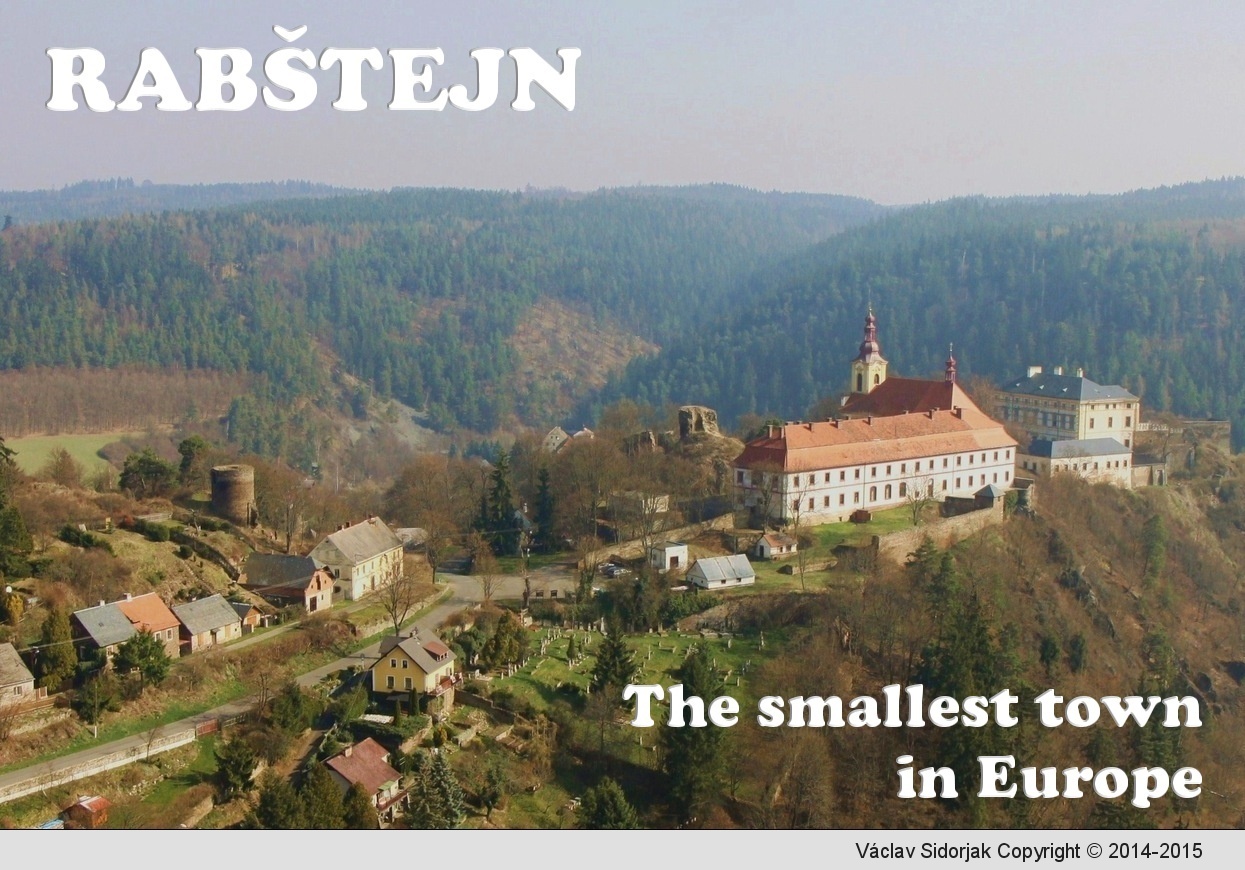 Posted at 14:52h in Uncategorized by Filip 0 Comments
0 Likes
Share

For our first spring bus trip we went to the little inhabited and little visited part of western Bohemia between Plzen and Karlovy Vary. We hiked from Rabštejn, the smallest historical town in Europe, to the baroque pearl of western Bohemia – Manětín. Because there is not much written in English about these two pretty towns, I have translated and compiled information from a few Czech sources into this short article. For the list of used resources scroll to the end.

RABŠTEJN NAD STŘELOU (Ger. Rabenstein an der Schnella, Eng. Ravenstone, lit. translation from Czech could be Ravenstone upon Missile :-) ) is a historic medieval town founded on the important road from Prague to Cheb. Nowadays it lies in the middle of the Natural Park Horni Strela, far from any major roads and 8 km from the nearest train station.

Town’s History in a Nutshell

The Rabstejn Castle is first mentioned in 1269. It is said that the name Rabstejn comes from a legend  about a raven and a ring. The village under the castle received the town privileges in 1337 and probably during this time the town’s gothic bridge across the river Strela was built. 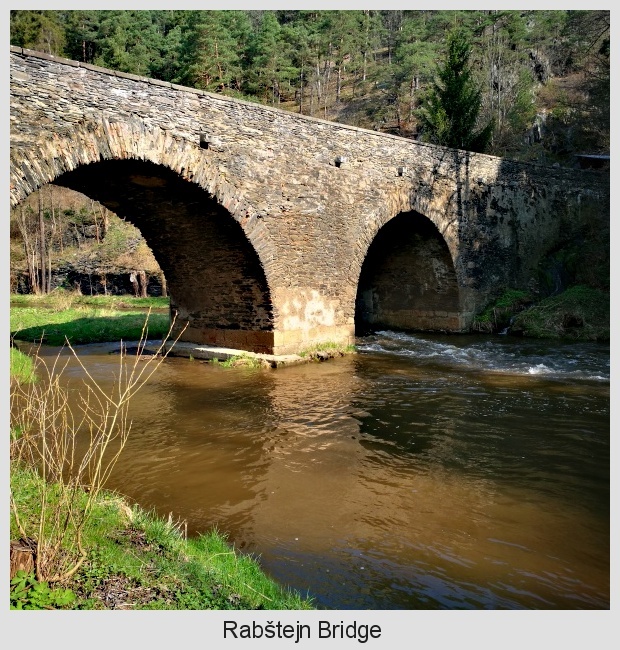 The Rabstejn estate was later bought by Charles IV who appreciated its strategic importance. The Emperor often stayed in Rabstejn and granted the town the right to levy duties on the important trading route. Trade was the main source of the town’s prosperity until the the reign of Vladislav II. (1471-1516). He granted the town shale mining privileges. The shale from Rabstejn was used to build and repair the roofs of the St. Vitus Cathedral in Prague as well as the Karlstejn Castle and the Powder Tower. Abandoned shale quarries are still visible under the castle.

As most of the Czech lands, Thirty Years War left Rabstejn impoverished. Prosperity came back to the town, when it was acquired by the Poetting family. It was them who founded the Servite monastery on the place of the derelict Carmelite convent. Outside of the city walls was built Loretto Chapel and the wooden town hospital.  On the part of the castle grounds had  in 1705 František Karel Poetting built a Baroque castle, as the old castle was already decrepit.

In 1748 the Rabstejn estate was acquired by Maxmillian Vaclav Lazansky who settled in the nearby Manetin. During his time, Rabstejn got a new parish church – the Church of Our Lady of Sorrows. It was probably designed by the Czech – Italian architect Anselmo Lurago and erected in 1775-76. 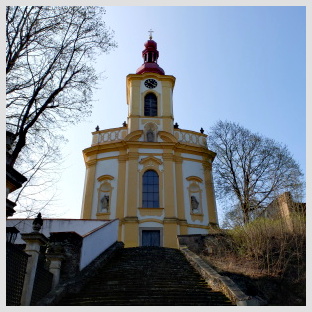 The 19th century brought Rabstejn gradual economic decline, as its remoteness and difficult terrain in the narrow valley were unfavorable for the industry development. Most of the inhabitants remained working in agriculture and crafts, most notably weaving.

In 1938, because of its German-speaking majority, Rabstejn was ceded to the Third Reich. The war didn’t affect much the appearance of the town but had a profound effect on its inhabitants. After the war, the majority of them were expelled from their homes and the town was never fully resettled. Many of its picturesque timber-framed cottages survived only thanks to people from big cities like Prague or Pilsen who transformed them into weekend homes. 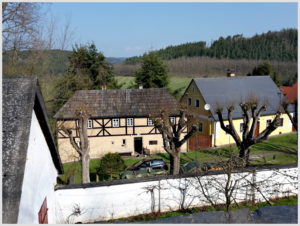 It currently has only 23 registered residents which makes it the smallest historic town in Europe and most likely in the whole world. Rabstejn has been proclaimed the town conservation area since 1992.

Rabstejn is home to a private astronomical observatory – www.rabstejnlab.com. The Videoclip of the Personal Jesus song from Depeche Mode was shot on the Rabstejn Bridge.

MANĚTÍN is a small town, about 30 km north of Pilsen. It is first mentioned in 1169 when the second Bohemian king Vladislaus I. donated the area to the Order of Malta. Manetin became a town in  1235. At that time, a fortress and monastery were built. During the reformation the town was changing owners as well as its religious allegiance. The fortress was rebuilt into a renassaince chateau. In 1625 the peasants besieged the castle and its catholic owner Jiri Mitrovsky of Nemysle had to be rescued by troops sent from Pilsen.

Thanks to the big fire in 1712, 18th century brought Manetin construction boom. The estate owner, Josef Vaclav Lazansky had the castle rebuilt in the Baroque style by the architect T. Haffenecker. Lazansky‘s wife and son also contributed to the flourishing of baroque culture in the town. Artists like the painter Petr Brandl and architect J.B. Santini worked in the town. Thanks to them, Manetin has become the baroque pearl of western Bohemia.

English-style park by the castle was founded in 1809.

According to 1921 census, the town was inhabited by 80% Czechs and 20% Germans. After the annexation of Sudetenland in 1938, Manetin became the last town on the Czech side of the border. On May 7, 1945 the town was liberated by the American army.

Unlike Rabstejn, Manetin had mostly Czech-speaking inhabitants, so the after war expulsion of the German population had little effect on the town. Nowadays it has population of around 1200 people. 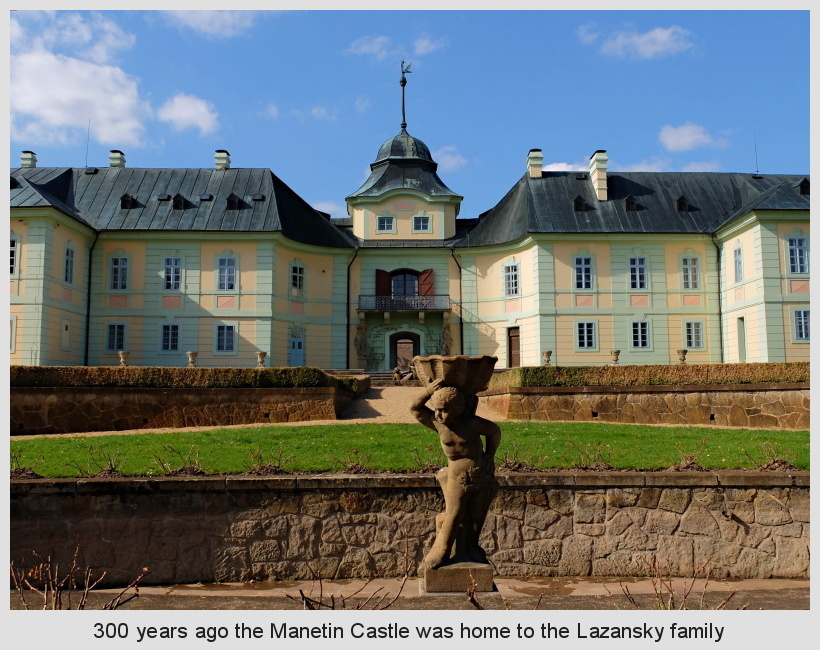 HOW TO GET THERE

For its remote location and small number of residents, the town has very infrequent public transport service. The most convenient way to get to Rabstejn is going by car. For public transport options go to www.idos.cz The nearest train station is in Zihle, 8 km from Rabstejn.

Manetin has a regular bus service from Plzen.

Chief Discoverer, on a mission to discover as many cool places in the CZ as possible.

Sorry, the comment form is closed at this time.